When I moved to Corner Brook from Calgary to teach drawing and printmaking at Sir Wilfred Grenfell College, I joked that I was one of a lucky few who moved East to Newfoundland to get a job. As I was new at Grenfell and not yet familiar with the community, I thought that the Intermediate Drawing class could invite the community to come participate in a public drawing event.

Drawapalooza is inspired by The Campaign for Drawing’s annual drawing event called The Big Draw, which started in Britain in 2000. The Campaigns basic aim is to encourage people to draw. How it works is that a community group registers with the campaign and then they create and organize a drawing event tailored for their local community. All in all, there are numerous individually imagined and organized events that occur all over Britain and I believe also in the United States as well. Usually, the events occur in October but as I arrived in January we could not register for that year. However, we decided to go ahead and make an event anyway.

The basic idea is that drawing can be a public activity for all people to enjoy. There is no experience necessary, or rather we already have all the experience we need to draw. I think of this quotation when I want to make this point: “When my daughter was about seven years old, she asked me one day what I did at work. I told her I worked at the college – that my job was to teach people how to draw. She stared back at me, incredulous, and said, “you mean they forget?” - Howard Ikemoto

We tell young people, “don’t worry about mistakes, just give it your best effort and have fun.” Often there is no right or wrong way of drawing because drawing is a way of discovering the world around us and within us. Drawing can be a picture, a plan, a design, a cartoon, a storyboard, and a game. It can be informative, schematic, diagrammatic, mechanical, architectural, or conceptual.

As part of their course work, the students reached out to other disciplines to learn about drawing beyond the fine arts. They researched how drawing is used in such fields as math, engineering, music, physics, medicine, etc. Ultimately, they explored different languages or types of drawing so that they could expand their notion of drawing and their sense of community as well. It was an event that was as much about drawing as it was about seeing and opening our eyes to our environment. I wanted them to discover and incorporate different ideas about drawing so that they could experiment and find new ways to communicate visually.

During the event there was activities for adults and children: life models and still life set-ups to draw from, mixed media and collage stations, group drawings, and imaginary and real landscape drawing. The students were available to offer assistance and they participated in drawing as well. Snacks, art supplies were provided. 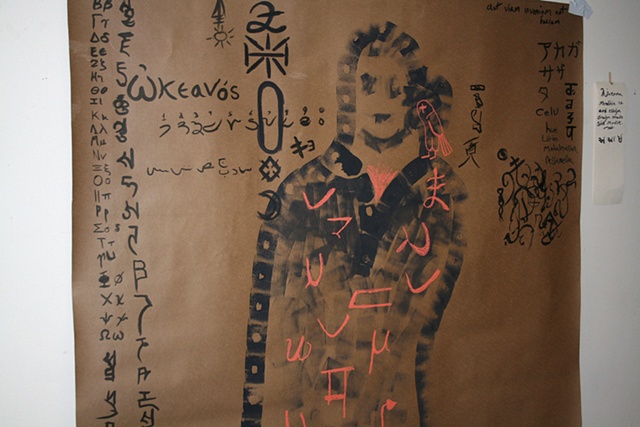 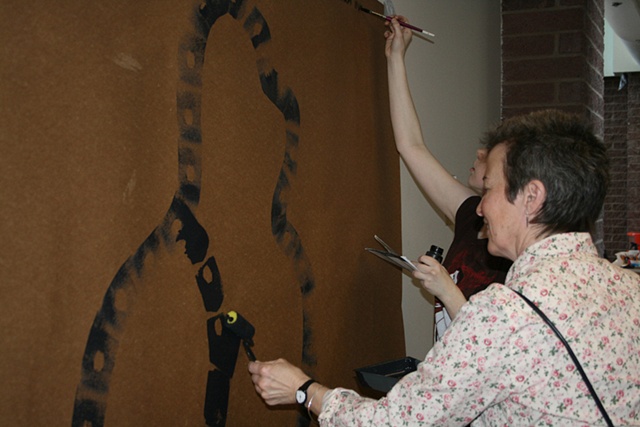 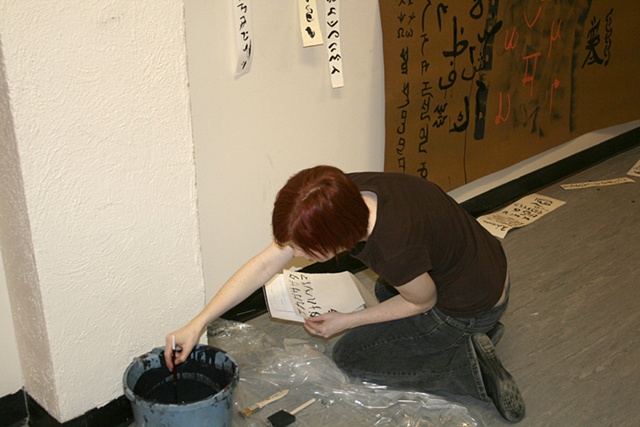 Shawna Warmington drawing with a bucket of ink! 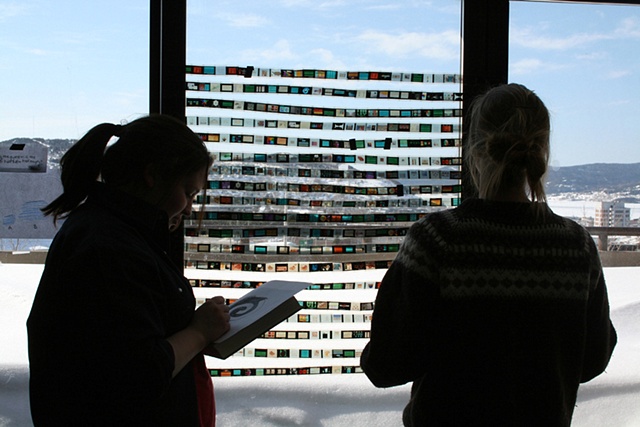 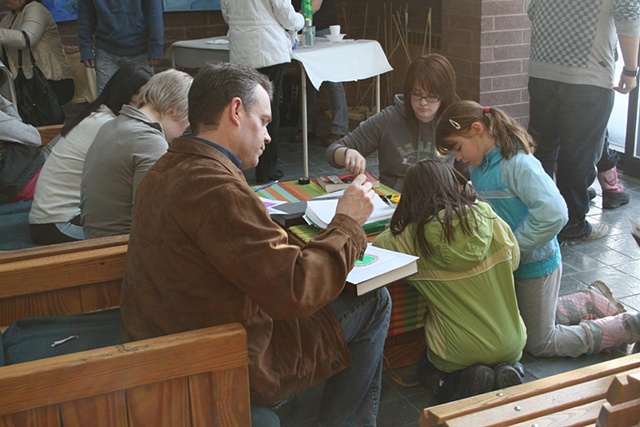 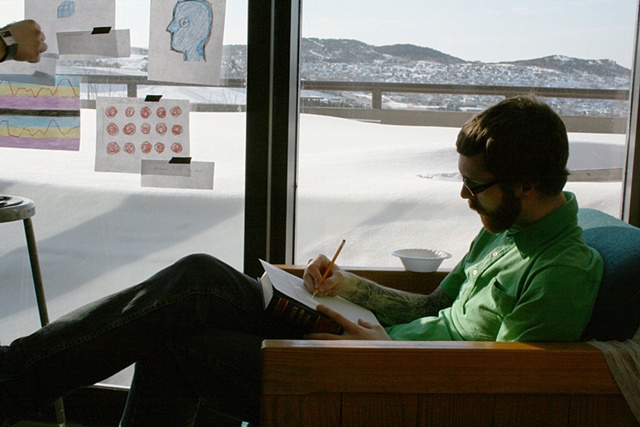 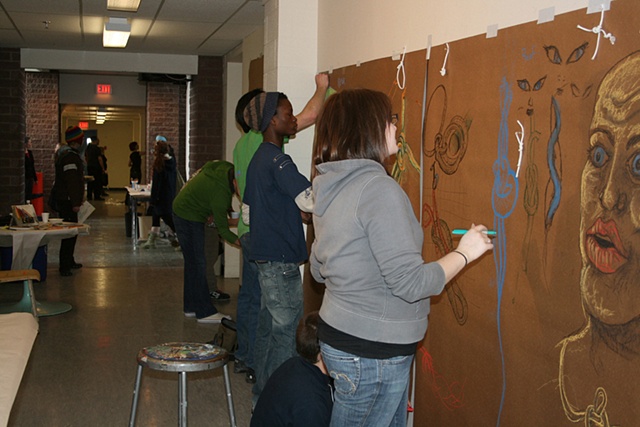 Group drawing in the hallway 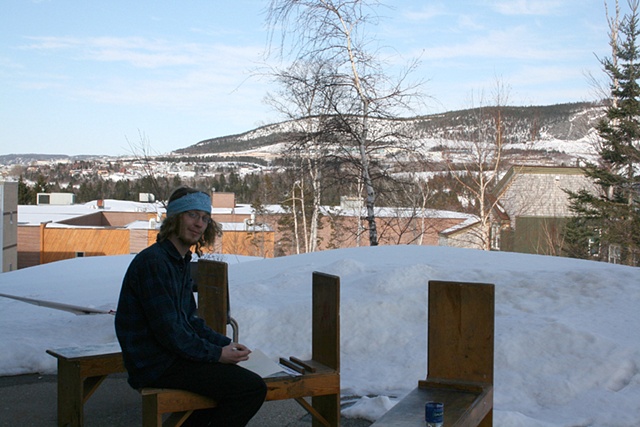 John Foster setting up to draw outside 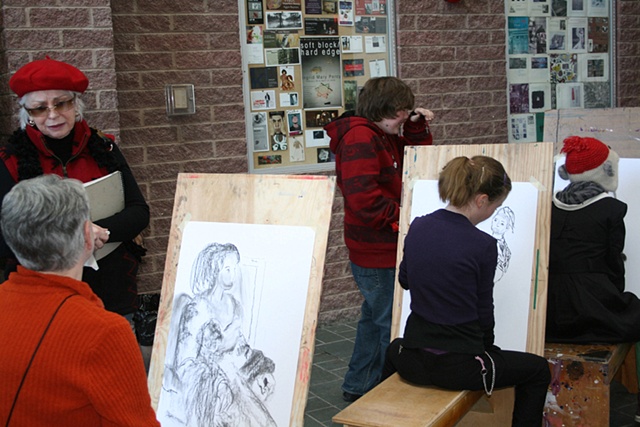 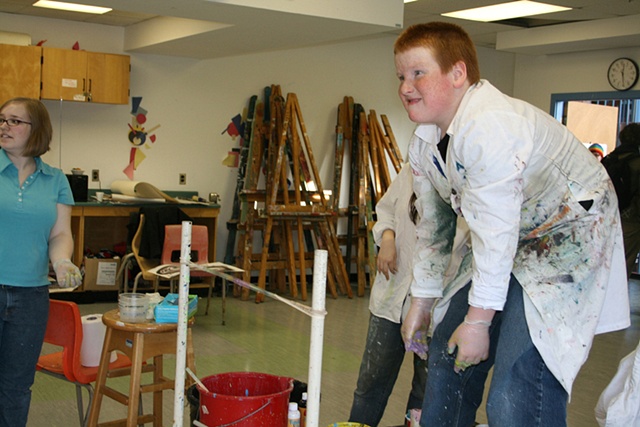 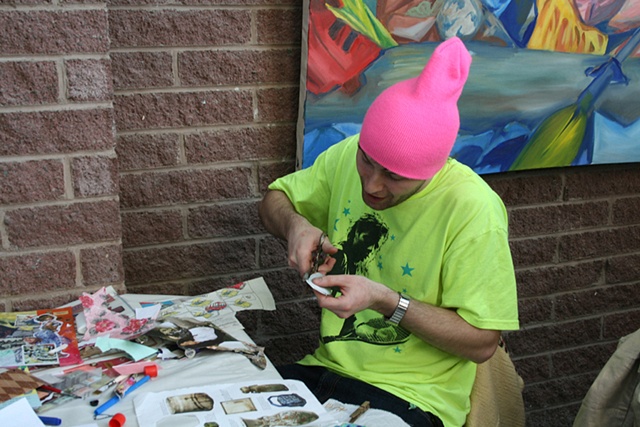 Herb Gibbons cutting and pasting at the collage table 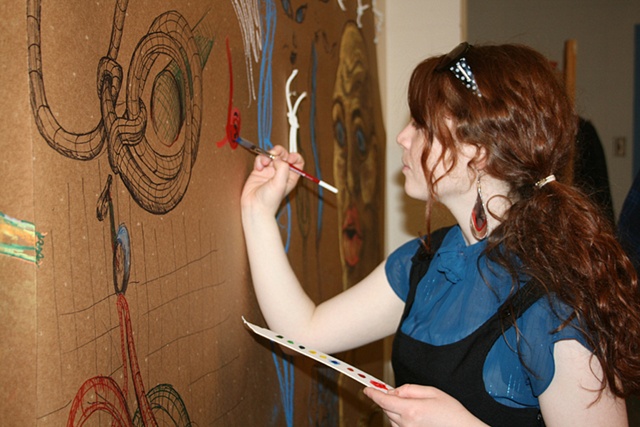 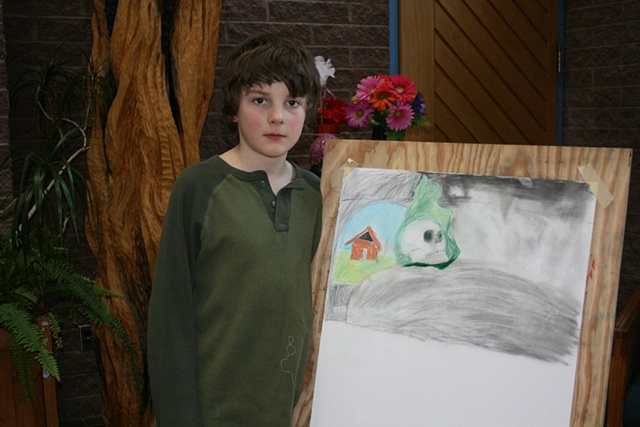 Young draftsman with his work 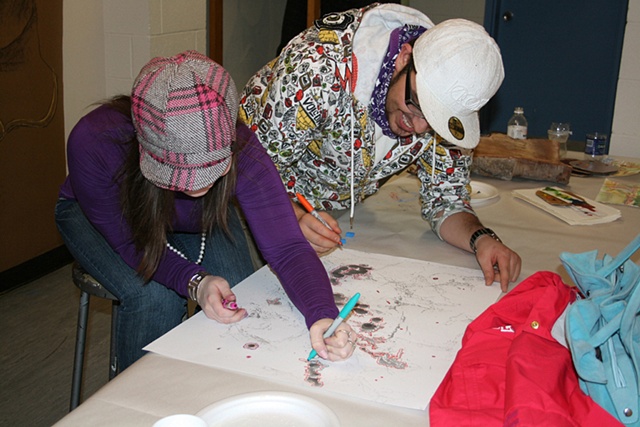 Jordan Bennett keeping it real with a friend 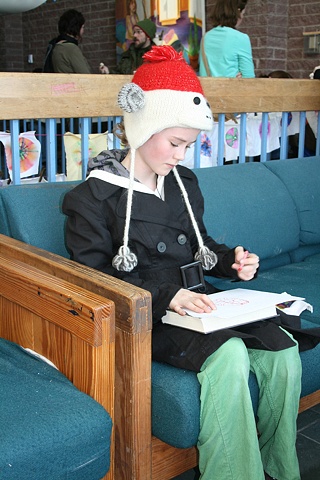 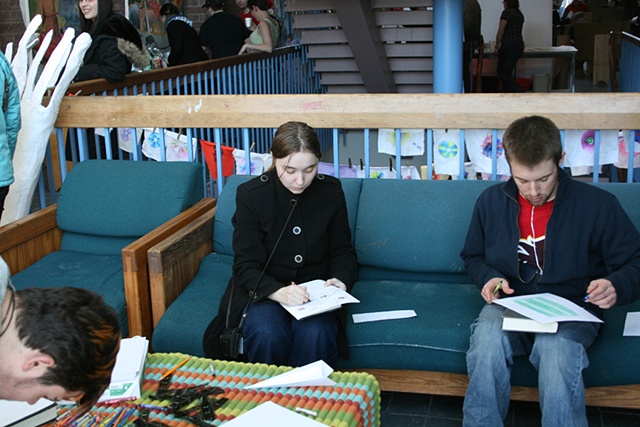 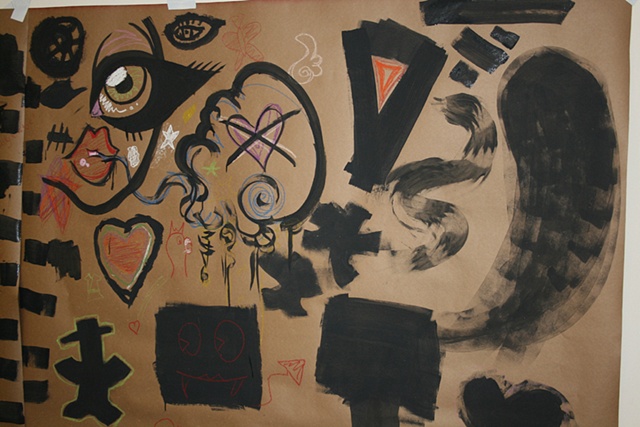 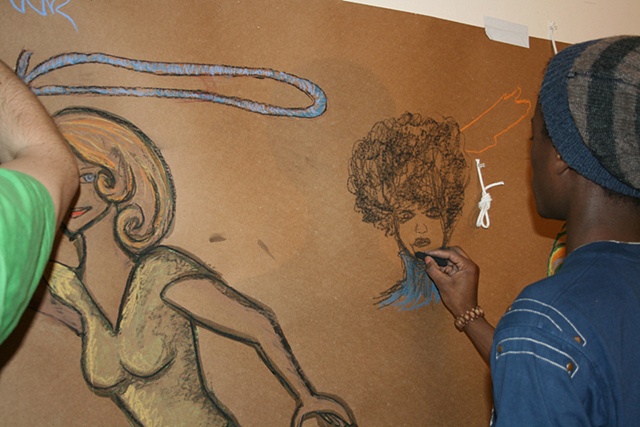 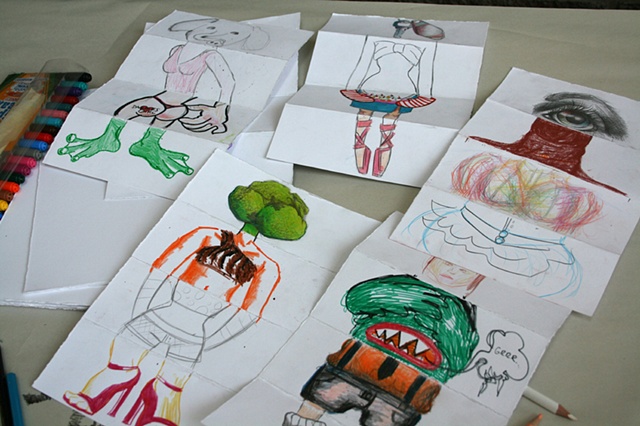 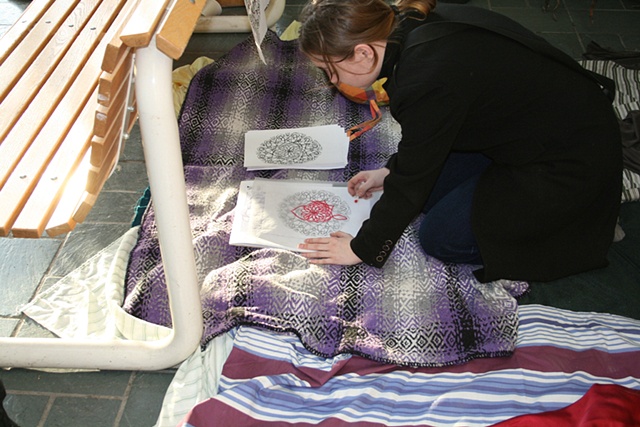 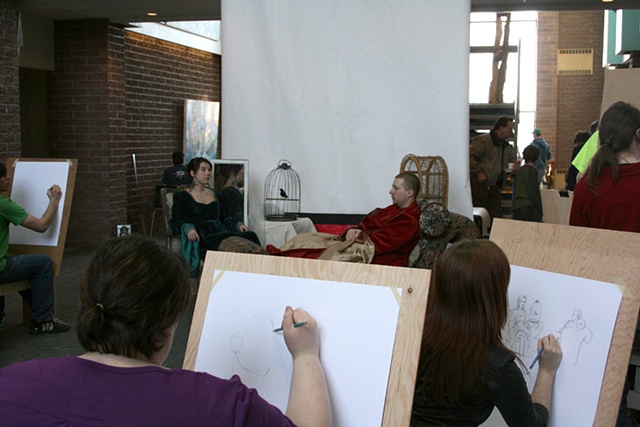 Participants drawing from the model 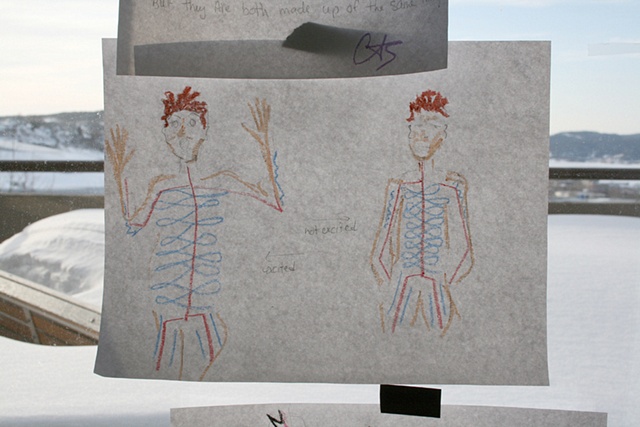 A drawing from the memory/slide project